Portal for Doctoral and Postdoctoral Researchers at the University of Bonn

A major common concern in ageing is the decrease of mental abilities and thus the loss of autonomy. The incidence of dementia exponentially increases in age, but also healthy aged individuals typically exhibit deficits in cognitive functions. However, the onset and progression of such age-related changes shows a high individual variability. Thus, many senior citizens still enjoy their cognitive abilities, whereas others may show signs of cognitive impairments already early in their life. The biological basis of this variation is not fully understood, but besides the environment also the genetic factors have a strong impact, because the heritability of cognitive abilities is above 50 % in middle and old aged individuals. Understanding the progress of age-related changes in brain functioning is a key step for a treatment aimed to limit the age-related cognitive decline. 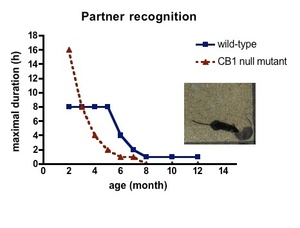 Interestingly, the lack of CB1 receptors did not accelerate ageing in general, but it selectively affected cognitive functions and skin ageing (Bilkei-Gorzo et al, 2010).

Endocannabinoid signaling in the regulation of the neuroinflammatory responses

In aging, neuroinflammatory changes characterized by elevated astrocyte and microglia activity are generally observed in healthy individuals, which are thought to contribute to the development of cognitive deficits. As part of our efforts to understand the mechanism by which a reduced CB1 signaling accelerates brain ageing we investigate the role of endocannabinoid signaling in neuron-glia interactions and in the development of age-related neuroinflammatory changes.

The intracellular level of metabolic end products, oxidized and misfolded macromolecules increases in ageing, which leads to enhanced cellular stress and severely impairs the function of neurons. We suppose that the early brain aging observed in CB1 receptor knockout mice could also be the result of a alleviated defense against cellular stress. To address this question we investigate how cannabinoid receptor activity influences autophagy, apoptosis and cell survival pathways. 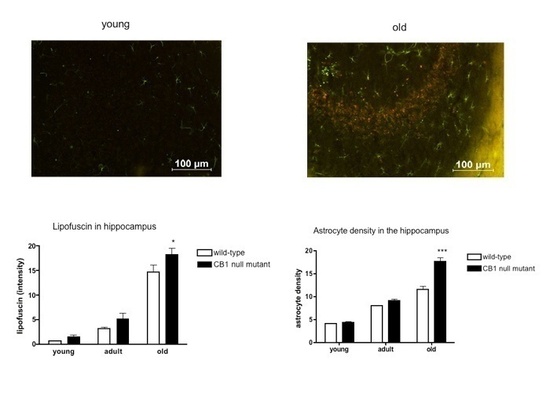 In aging both the concentration of lipofuscin, a brownish metabolic end product, and the density of astrocytes (green) increases in the brain, which is more intense in animals without CB1 receptors.

If reduced CB1 receptor signaling leads to early onset of brain ageing, than a chronic increase in the receptor activity could be beneficial against cognitive ageing. To investigate this exciting possibility we study the influence of a genetic and pharmacological elevation in endocannabinoid levels on age-related changes in learning ability and histological changes of the brain in mice.

The above-mentioned project is supported by the Deutsche Forschungsgemeinschaft (DFG, FOR926).